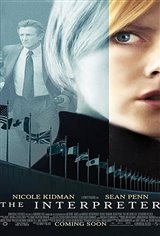 African-born U.N. interpreter Silvia Broome (Nicole Kidman) inadvertently overhears a death threat against an African head of state scheduled to address the United Nation's General Assembly. Realizing she's become a target of the assassins as well, Silvia's desperate to thwart the plot...if only she can survive long enough to get someone to believe her.

Tobin Keller (Sean Penn), the federal agent charged with protecting the interpreter, suspects she may not be telling the whole truth. Silvia and Tobin, by nature, see life from different points of view: one, a U.N. interpreter, believes in the power and sanctity of words; the other, a Secret Service agent, believes in reading people based on their behavior, no matter what is said.

In the right hallway, at the right time, all it takes is a whisper to tip the balance of power.