The Inevitable Defeat of Mister & Pete 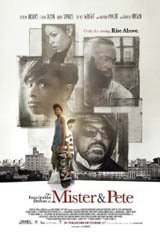 Mister, 13, (Skylan Brooks) lives with his drug-addicted mother (Jennifer Hudson), who takes in nine-year-old Pete (Ethan Dizon). Having just failed eighth grade, Mister carries a chip on his shoulder. There's barely any food in the house and he doesn't want Pete around, considering him just another mouth to feed at a time when his mother can't even care for Mister properly.

When the police come to the door and arrest her, Mister and Pete run away to avoid being taken to a juvenile detention center. They try to survive on what little food is in the cupboards, but it doesn't last long. Mister wants to steal food, but Pete doesn't want to commit a crime. When Mister finds out why Pete isn't with his mother, he begins to feel empathy for his younger friend, and tries to fend for him. After several weeks, he learns that his mother was released awhile ago and he can't understand why she didn't come home to take care of him.

Determined to support both himself and Pete, Mister plans to go to an audition for new acting talent, believing that when he's chosen, their problems will be solved. However, surrounded by drug dealers, pimps, thieves and homeless people, Mister may not have a chance.