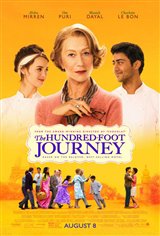 After a tragic incident, the Kadam family, led by Papa (Om Puri), moves from their native India to make a fresh start in a safer place. Their van breaks down just outside the quaint village of Saint-Antonin-Noble-Val in the south of France. They're rescued by Marguerite (Charlotte Le Bon), who takes them in and gives them an exquisite meal. Papa finds a place for sale that he believes would be perfect for them to open an Indian restaurant, the Maison Mumbai. His secret weapon is his talented son, Hassan (Manish Dayal), for whom cooking is an art and a passion.

However, Madame Mallory (Helen Mirren), the chilly owner of a Michelin-starred French restaurant, objects to the existence of a new restaurant 100 feet from her own. She decides to make things difficult for the Kadams. As the clash between the two establishments escalates, Hassan falls for Marguerite, who turns out to be Madame Mallory’s sous chef.

Based on the novel "The Hundred-Foot Journey" by Richard C. Morais.