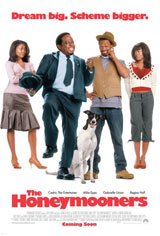 Meet Ralph Kramden (Cedric the Entertainer) – a man of vision, taste, and refinement. Now, if he can just get the rest of the world to see it…

By day, Ralph’s an ordinary New York City bus driver. But in his off-hours, he’s an innovator, an inventor, an entrepreneur who’s just one great idea away from instant wealth. (Unfortunately for Ralph, none of those ideas has yet panned out.) His best friend (and neighbor) is Ed Norton (Mike Epps), who’s always up for the latest plan. Wherever Ralph goes, no matter how harebrained the idea, Ed’s ready to run down the fire escape and lend a hand.

These two dreamers believe they’re taking their families to the next level, but Ralph’s wife, Alice (Gabrielle Union), has set her sights on a more practical goal: buying a duplex fixer-upper with Ed and his wife, Trixie (Regina Hall). When Ralph loses their down payment on yet another of his half-baked projects, Alice is at the end of her rope, giving Ralph just one day to come up with the cash and save their marriage.