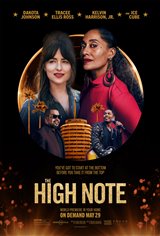 Maggie (Dakota Johnson) dreams of producing music one day. For now, she's the overworked personal assistant of singing superstar Grace Davis (Tracee Ellis Ross), and although she loves every minute of her job, she hopes to take the next step one day and be involved in Grace's next recording.

When Grace’s manager Jack Robertson (Ice Cube) presents his client with the opportunity to do a Las Vegas residency, the singer voices her desire to record a new album, which Maggie thinks is a great idea, especially since Grace hasn't released an album in a decade. Even though her fans are clamoring for new material from Grace, Jack nixes it.

Meanwhile, Maggie discovers talented singer David Cliff (Kelvin Harrison Jr.) and convinces him she's a producer. She gets him into the recording studio, then lands him a prestigious gig, but her efforts may land her in hot water with Grace.