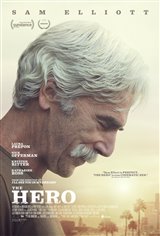 Aging film star Lee Hayden (Sam Elliott) is many years past his prime. No longer garnering much attention, scripts or roles since his last major film, a western titled The Hero, Lee is forced to take any work he can get, including commercials. But when he is asked to attend a ceremony to receive a Lifetime Achievement award from the Western Appreciation Guild, his heartfelt speech garners him the attention of filmmakers ready to bring him back to the big screen.

As he slowly gains back success on a par with what he once had, Lee must also navigate his new relationship with the much younger and beautiful Charlotte (Laura Prepon), and mend his relationship with his estranged daughter, Lucy (Krysten Ritter).