The Heat: A Kitchen (R)evolution 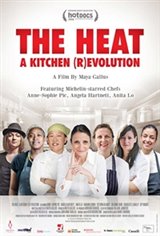 Restaurant kitchens are a pressurized stew of brutal hours, high stress and sleep deprivation. Acting out goes with the territory and anyone lower on the totem pole is fair game. But the familiar macho posturing of celebrity chefs has reached a tipping point.

Now with an influx of women at the helm of restaurants, and a younger generation unwilling to submit to the brutal conditions once considered the norm, the rules of "kitchen culture" as we know it are being rewritten.