The Hand That Rocks the Cradle 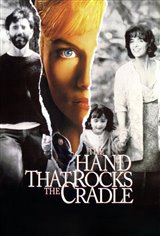 The Hand That Rocks the Cradle is director Curtis Hanson's suburban horror story of a demented nanny bent on revenge for past wrongs. Peyton (Rebecca De Mornay) was once a happily married woman, but when her doctor husband is accused of assaulting a patient and he commits suicide, her world falls apart and she plots revenge.

Claire (Annabella Sciorra), the woman who made the accusation, hires Peyton as a nanny, not knowing of their past involvement. Peyton then proceeds to terrorize the family, attempts to seduce the husband and generally destroy Claire as she feels she has been destroyed.

The film, while somewhat implausible, is saved by the strong performances of Sciorra and De Mornay. Rebecca De Mornay has not given such a good performance since Risky Business, and she manages to make Peyton both believable, frightening and sympathetic.

De Mornay has many great moments, but the scene, where she slowly destroys a bathroom in her impotent rage is unbelievably powerful. Hanson, a superb director of thrillers, manages to bring all the elements together to make The Hand that Rocks the Cradle a frightening psychological thriller and an interesting look at a woman's obsessive hatred and envy.