The Half of It (Netflix) 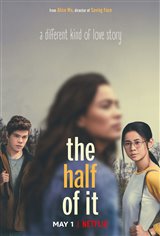 High school student Ellie Chu (Leah Lewis) writes essays for other students for money. As the only Chinese student in school, she doesn't have any friends, and is bullied by the popular kids.

When she's approached by a jock named Paul (Daniel Diemer), Ellie assumes he wants an essay, but instead he wants her to write a letter to a popular girl named Aster (Alexxis Lemire), because he's too awkward to talk to her in person. Ellie turns him down, because she's never written a letter for anyone and more importantly, she has a crush on Ellie herself. However, when money quickly becomes tight at home, she accepts the job, charging him $50 per letter.

Over the next few weeks, she and Paul develop a friendship that brings more to Ellie's life than she could have imagined.