The Greatest Country in the World 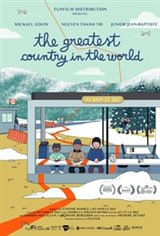 Quebec has just elected a minority government made up of supporters of the extreme right who are considering closing the borders to curb immigration. Faced with the threat of a backlash from the most xenophobic fringe of the population, Hiên is selling his convenience store, his house and his other properties with the intention of returning to his native Vietnam. His only daughter, lawyer Phuong, is also preparing to settle there, leaving behind her husband Alex, a social sciences doctor who is currently unemployed. On the verge of leaving Quebec, Hiên gets a call for help from Alex, whose housekeeper, an undocumented Haitian refugee named Roseline, has disappeared, leaving her 10-year-old son Junior behind. The two men comb Montreal and the surrounding region to search for Roseline, while taking care of Junior.