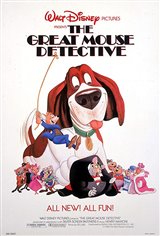 The first Disney animated feature to make extensive use of computer technology, The Great Mouse Detective was based on the children's novel Basil of Baker Street by Eve Titus. The titular hero is Basil, a Holmes-like rodent (complete with deerstalker) who solves crimes in the company of his friend and chronicler Dr. Dawson.

Basil and Dawson are retained by the daughter of a mouse toymaker who has been kidnapped by the diabolical Ratigan. The villain hopes to force the toymaker to construct a fake version of the queen who will grant power to the bad guy--or at least, for that part of the world behind the walls of London.

Though nearly eliminated by Ratigan, Basil and Dawson trap the villain in the fast-moving mechanisms of Big Ben. By relying on computer animation, Disney was able to keep the budget of Great Mouse Detective down to a manageable size, thus earning back the losses incurred by the studio's previous cartoon feature, The Black Cauldron.

Among the talented voice actors utilized in The Great Mouse Detective is Vincent Price, who plays guess what part? (Hint: he ain't Basil).