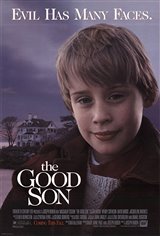 After his mother dies, and his father has to leave for a business trip in Tokyo, Mark Evans (Elijah Wood), 12, has to go stay with his Uncle Wallace (Daniel Hugh Kelly) and Aunt Susan (Wendy Crewson) in Maine during the winter break.

He's reintroduced to his cousins, Henry (Macaulay Culkin) and Connie (Quinn Culkin). Henry seems to be fascinated with death, talking about Mark's mother and his own younger brother Richard, who drowned in the bathtub. Henry begins to exhibit strange and violent behavior, including throwing a dummy off an overpass onto cars below. He then tells Mark he's going to kill Connie, so Mark keeps an eye on her to make sure Henry doesn't harm her.

Although Mark warns Henry's parents about him, they don't believe him at first, until Connie almost drowns when she falls through a patch of thin ice. Susan begins to be suspicious and grows closer to Mark, which makes Henry angry.