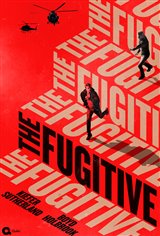 After celebrating six months since his release from prison, Mike Ferro (Boyd Holbrook) is framed for orchestrating a bombing within the Los Angeles subway system. Ferro says he is an innocent man, but he is clearly caught on camera in the station the same time the bomb went off.

Desperate to uncover the real perpetrator, Ferro goes on the run to clear his name. Counter Terrorism agent Clay Bryce (Kiefer Sutherland) is brought in to investigate and relentlessly pursues Ferro until he is caught.