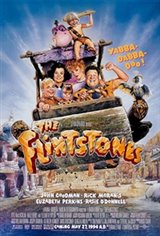 The good (if not fully evolved) citizens of Bedrock make their way to the big screen in this live-action adaptation of the popular animated series of the 1960s. Fred Flintstone (John Goodman) and his best friend Barney Rubble (Rick Moranis) work together at the Slate and Company Rock Quarry.

When Fred loans Barney some money that allows him and his wife Betty (Rosie O'Donnell) to adopt a child, Barney is looking for a way to show his gratitude. Barney thinks he's found one when the executives at Slate and Company announce that they're giving all their employees intelligence tests to help determine future promotions.

When Barney switches his high-scoring test with Fred's, his plan works -- but not quite the way he had hoped: Fred is deemed executive material and given a big promotion, complete with a sexy secretary (Halle Berry) who makes his wife Wilma (Elizabeth Perkins) jealous, while Barney is soon out of a job and can't pay his bills.