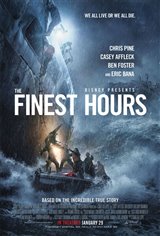 Bernie (Chris Pine) and Miriam (Holliday Grainger) are about to become engaged when a fierce storm strikes off the coast of New England, where Bernie works as a member of the Coast Guard.

It's February of 1952 and the Coast Guard is called out to save an oil tanker that's split in two, just miles from Chatham, Massachusetts. Several boats are sent out for the rescue when another oil tanker, the SS Pendleton, is also spotted in danger just off the coast.

While Bernie is sent out with three other men on what's called a "suicide mission" to save the sailors on board the Pendleton, Miriam goes on a mission of her own, to get her future fiancé back alive.