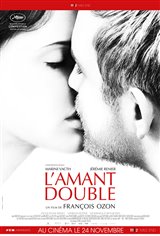 Chloe, a former model working part-time at a museum, falls for her psychiatrist, Paul Meyer. Believing he’s cured her of her psychosomatic stomach aches, Chloe agrees to move in with him. But soon, the young woman is surprised when she runs into someone who looks like he could be Paul’s twin.

Hoping to bring clarity to this mystery, Chloe, using an assumed name, makes an appointment with the man after she discovers he’s also a therapist, named Louis Delord. She discovers Louis and Paul are actually twins, but that Paul refuses to acknowledge his brother’s existence.

Louis uses unconventional and aggressive sexual methods to overcome Chloe’s frigidity. Chloe is soon enjoying mind-blowing orgasms, but she still wants to learn why Paul changed his last name, so she continues to engage in an ambiguous and perverse connection with the unpredictable Louis.