The Devil All the Time (Netflix) 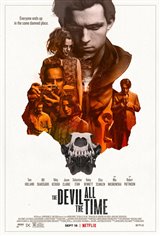 Set between World War II and the Vietnam War, the film revolves around a group of people whose lives all intersect. The story follows a troubled young man named Arvin Russell (Tom Holland), his father Willard (Bill Skarsgård), who's a war vet suffering from PTSD and Charlotte (Haley Bennett), Arvin's mother who has cancer.