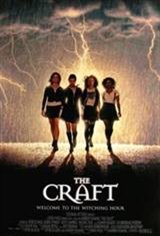 After killing her mother in childbirth, growing up in San Francisco with her father and stepmother, attempting suicide, and moving to Los Angeles, Sarah (Robin Tunney) makes a brief stab at popularity at her new Catholic high school.

After exhibiting latent telekenitic powers in front of Bonnie, Sarah learns that her three new friends have chosen her as their fourth corner, the final member of their supernatural coven.

Using tools stolen from a local incense-and-candle-filled boutique for practitioners of magic, the quartet summons the power of Manon, a primitive deity, to exact revenge on their tormentors and transform their lives.

Drunk with power, they watch their spells get out of control, and the new coven soon realizes that with magic, whatever you give comes back three-fold. This mid-'90s horror flick scored first place at the box office its opening weekend despite its then-unknown cast and modest budget. TV star Neve Campbell, who didn't even receive top billing, would go on to become the '90s answer to '70s horror queen Jamie Lee Curtis in the Scream franchise.