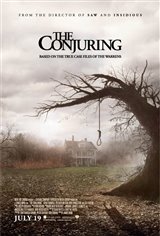 Paranormal investigators Ed and Lorraine Warren have investigated over 10,000 hauntings and are the founders of the New England Society for Psychic Research. Ed is a demonologist while his wife is a trance medium, and together they spent their time taking on evil spirits and fighting demons. They were among the first to investigate the famous Amityville haunting, the story of which was later told in a book, which was the basis for the 1979 and 2005 movies, both called The Amityville Horror.

The Conjuring is based on a true story about a case that Ed and Lorraine were called upon to investigate and it is told from their point of view. The Perron family were terrorized by demonic entities in the quiet town of Harrisville, Rhode Island in the '70s. Their story is one of the most significant haunting in history, and one that the Warrens considered their “most intense, compelling, disturbing and significant investigation.”

In 1970, Roger and Carolyn Perron bought their dream home, excited to raise their five daughters there. However, what the realtor didn’t tell them was that the house had a very disturbing history full of agony and death. Two former residents had hung themselves on the property.

Andrea Perron, the oldest daughter, recounts that, “It was an extraordinary place. We started seeing spirits as soon as we moved into the house. Most of them were completely benign and some of them didn’t even seem to notice we were there, but eight generations lived and died in that house prior to our arrival and some of them never left.”

John Leonetti, who worked as Director of Photography on The Conjuring, went on to direct Annabelle, based on the doll featured in The Conjuring, which is in turn based on a Raggedy Ann doll on display at The Warren's Occult Museum in Monroe, Connecticut.

The doll was bought in 1970 as a birthday present for a woman named Donna who was a college student. Donna's mother bought it second hand from a hobby store. At the time, Donna lived in a tiny apartment with her roommate Angie. Donna put the doll on her bed as a decoration, and within days both Donna and Angie noticed that when they came home, the doll was always in a different place or position. At first the movements were slight - the doll's arms would be crossed when they came home, or she would be standing up instead of sitting down. Over time she would be found in a completely different room from where she had been left.

Not willing to believe the doll moved on her own, Donna tried putting the doll on the couch before leaving for work and when she returned, it was in her room on the bed with the door closed.

Later, Donna found pieces of parchment paper with notes such as "Help us" or "Help Lou" written on them. Lou was a friend. When one night Donna found the doll on her bed with blood oozing from her hands, she decided to call in a psychic.

After sitting with the doll, the psychic told Donna and Angie that the apartment they lived in had been built on what was once a field, where a seven-year-old girl named Annabelle Higgins had been found dead. When the doll came into their home, Annabelle's spirit had latched on to it because she liked the girls and felt safe with them.

Donna and Angie were satisfied with that and decided there was no harm in keeping the doll. However, a few days later when Lou was at the apartment with Donna, they heard movement in Donna's room. Lou checked it out and found the doll, now named Annabelle, sitting in a corner. He experienced a feeling of being watched and then a sudden pain on his chest. Tearing open his shirt, he saw deep claw marks and felt Annabelle had caused it. Strangely, the wounds disappeared within hours. Donna called in a priest, who called Ed and Lorraine Warren.

They determined a demon was attached to the doll. The priest performed an exorcism on the apartment and the Warrens took the doll away. Since then she has been kept in a locked case at their museum.

Less than two years after Annabelle, a sequel to The Conjuring was made, in which Ed and Lorraine Warren try to help a single mother raising four children in a house plagued by malicious spirits.