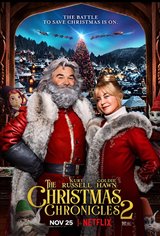 It's been two years since Kate (Darby Camp) helped Santa get his sleigh and reindeer back after she and her brother Teddy (Judah Lewis) caught him on camera on Christmas Eve. Now a teenager, Kate is having trouble accepting her mom's new boyfriend (Tyrese Gibson) and his son, Jack (Jahzir Bruno), when they go on vacation together down south. While on a shuttle that takes them around the tropical island, she and Jack go through a wormhole to the North Pole, where she's reunited with Santa Claus (Kurt Russell).

He and Mrs. Claus (Goldie Hawn) show Kate and Jack around Santa's Village, but the two kids have been followed by a troublemaker named Belsnickel (Julian Dennison), who wants to steal the Christmas Star that protects Santa and his elves. Without the star, there can be no Christmas, so Santa and Kate set off on a mission to stop Belsnickel and save Christmas.