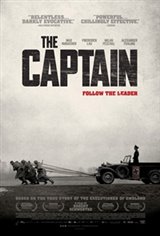 Based on the arresting true story of the Executioner of Emsland, The Captain follows a German army deserter, Willi Herold (Max Hubacher), after he finds an abandoned Nazi captain's uniform in the final weeks of World War II. Emboldened by the authority the uniform grants him, he amasses a band of stragglers who cede to his command despite the suspicions of some.

Citing direct orders from the Fuhrer himself, he soon takes command of a camp holding German soldiers accused of desertion and begins to dispense harsh justice.

Increasingly intoxicated by the unquestioned authority, this enigmatic imposter soon discovers that many people will blindly follow the leader, whomever that happens to be.Simultaneously a historical docudrama and sociological examination with undertones of the absurd, The Captain presents fascism as something of a game to be played by those most gullible and unscrupulous.