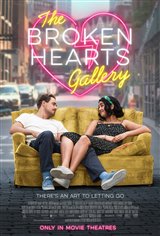 Art gallery assistant Lucy (Geraldine Viswanathan), 26, who lives in New York City, is an emotional hoarder. She saves souvenirs from every relationship she has ever been in.

One night, after terrible breakup, she gets into a car, thinking it's her Lyft. Even though the driver, Nick (Dacre Montgomery), asks her to get out, she's too drunk to realize she's made a mistake. When he hears how badly Lucy's night went, he takes pity on her and drives her home. Soon after, they bump into each other at a bar the next day as she approaches his ex with his new girlfriend, to give him back his things. Nick steers her out of there before she can make a scene and shows her the hotel he's renovating.

He hangs a tie she was hoarding on the wall of the hotel lobby, which leads Lucy to decide the hotel should be a pop-up space for people to leave items from relationships that have ended, aptly called "The Broken Heart Gallery." The gallery slowly becomes a movement and a fresh start for many romantics throughout the city, including Lucy.