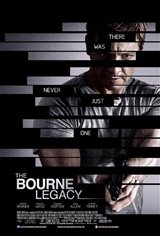 Following Jason Bourne's burning of the Blackbriar program in The Bourne Ultimatum, other CIA intelligence programs that have been operating in the shadows now fear exposure. Agent Aaron Cross (Jeremy Renner), who works within Operation Outcome, an offshoot of the original Treadstone program, finds his life in danger.

When Colonel Eric Byer (Edward Norton)—operator of Outcome and mastermind behind all of the assassin programs, including Treadstone—discovers that Bourne has exposed Blackbriar, he decides to shut down his own program, in the process killing all of the employees involved who know too much. Cross escapes an attempt on his life, prompting the CIA has to go to great lengths in their efforts to assassinate him.

With Byer and the CIA hot on his heels, Cross has to use every skill in his arsenal to avoid capture and stay alive.