The Big Bad Fox and Other Tales 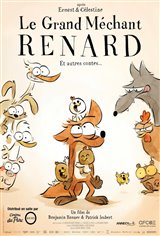 In this animated film, an animal theater troupe performs a show comprised of three short stories. In the first, a serious and responsible pig, abused by a lazy stork, undertakes to deliver a baby to a couple living miles away, with the help of a bunny and duck.

In the second story, a hungry wolf instructs a fox to steal three eggs from a hen and hatch them while waiting for the succulent chicks to be born. But when the chicks emerge from their shells, they mistakenly take the fox for their mother to the chagrin of the predator, who would like to be terrifying.

Back at the farm for the third story, the pig, the rabbit and the duck embark on a crazy adventure to replace Santa Claus.