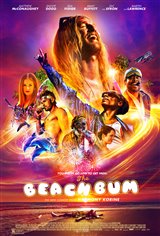 While living out his desire for a fun life in the Florida Keys, Moondog (Matthew McConaughey), is called back to his home in Miami by his wife Minnie (Isla Fisher), for their daughter's wedding. Following the ceremony Moondog and Minnie head out for a night out, which ends in a car crash that results in Minnie's death.

After her funeral, Moondog is informed that Minnie has made it clear that he cannot inherit his share of her family's fortune until he has met certain criteria. One such stipulation is the completion of his long gestating book, which he has thus far avoided from finishing.

Kicked out of his mansion, cut off from his wife's wealth, and with his daughter refusing to be his next enabler, Moondog sets off on an odyssey to complete his work, while living the life he wants, including tons of alcohol and drugs along the way.