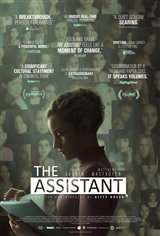 Jane (Julia Garner), a relatively new hire who's working as an assistant for a powerful executive, slowly discovers the extent of the man's abuse.

The toxic workplace infects everyone around her, including two male assistants (Noah Robbins, Jon Orsini) who help Jane write an apology email when the boss is outraged after Jane doesn't adequately lie to his wife about where he is and what's he's doing. As she discovers more and more about her boss, such as an earring left behind in his office and a comment from one of the men about how no one should ever sit on the office couch, Jane decides to visit the company HR department to discuss what to do about her boss's actions.