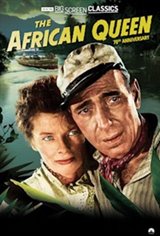 After years of wooing director John Huston via good reviews, film critic James Agee was given a chance to write the screenplay for a Huston picture. Adapted from a novel by C.S. Forester, The African Queen stars Humphrey Bogart in his Oscar-winning portrayal of Charlie Allnut, the slovenly, gin-swilling captain of a tramp steamer called the African Queen, which ships supplies to small East African villages during World War I. Katharine Hepburn plays Rose Sayer, the maiden-lady sister of a prim British missionary (Robert Morley). When invading Germans kill the missionary and level the village, Allnut offers to take Rose back to civilization. She can't tolerate his drinking or bad manners; he isn't crazy about her imperious, judgmental attitude. However it does not take long before their passionate dislike turns to love. Together the disparate duo work to ensure their survival on the treacherous waters and devise an ingenious way to destroy a German gunboat. The African Queen may well be the perfect adventure film, its roller-coaster storyline complemented by the chemistry between its stars. The profound difficulties inherent in filming on location in Africa have been superbly documented by several books, including one written by Katharine Hepburn. Screenwriter Peter Viertel (who worked, on an uncredited basis, on the script of this film - assisting with some of the dialogue) incorporated some of the African Queen anecdotes in his roman a clef about a Huston-like director/adventurer, White Hunter, Black Heart.