The Affair Of The Necklace 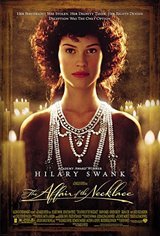 Watch Trailer
In France 1767, a young girl watches in horror as soldiers of the reigning King Louis XV brutally seize her noble family's chateau. Orphaned and stripped of her royal heritage, young Jeanne Valois survives on her wits and her wiles, vowing to one day reclaim her birthright.

Years later, still deeply committed to her quest, Jeanne (Swank) insinuates herself into the most illustrious court in all of Europe – Versailles. It is against this swirling, glamorous backdrop presided over by King Louis XVI and his extravagant and controversial wife, Marie Antoinette, that Jeanne risks her life to orchestrate an elaborate scheme of intrigue, romance and scandal revolving around the Queen and the world’s most spectacular diamond necklace.