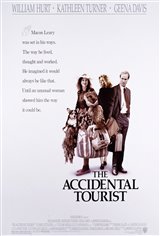 Director Lawrence Kasdan and Frank Galati adapted their screenplay for The Accidental Tourist from Anne Tyler's novel. William Hurt plays Macon Leary, a well-known travel advisor headquartered in Baltimore. The tragic death of Leary's son causes him to withdraw from the world, which in turn prompts his wife (Kathleen Turner) to walk out on him.

The only non-uptight person within shouting distance, Muriel begins to melt Leary's self-protective shell. Once his wife realizes that she has some competition, she makes moves to get him back. But he has by now become accustomed to Muriel's unfettered lifestyle.