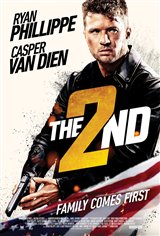 While picking his son Shawn (Jack Griffo) up from college, Secret Service Agent Vic Davis (Ryan Phillippe) meets Shawn's college friend, Erin Walton (Lexi Simonsen), the daughter of Supreme Court Justice Walton. She's being picked up by a new driver (Casper Van Dien), but has to run back inside the empty school to get her laptop. Feeling suspicious, Vic follows her and suggests she call her father to confirm the new driver's identity.

Suddenly, they find themselves in the middle of a high stakes terrorist operation, surrounded by gunfire. Vic has to use his skills to combat the armed and highly trained faction to stop them from kidnapping Erin.