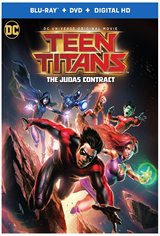 While the Teen Titans – Beast Boy (Brandon Soo Hoo), Raven (Taissa Farmiga), Blue Beetle (Jake T. Austin), Robin (Stuart Allan) and Nightwing (Sean Maher) – are on patrol, they come across Starfire (Kari Wahlgren), who is struggling to defend herself from alien forces from her home world. Five years later, she has earned her place as one of the Teen Titan’s fiercest warriors and best leaders. However, their newest teammate, the mysterious and powerful Terra (Christina Ricci), still hasn't fit in, even after one year with the team.

Meanwhile, religious despot Brother Blood (Gregg Henry) and his legion of followers, the H.I.V.E., are waiting to pounce, while familiar foe Deathstroke (Miguel Ferrer) is also lurking in the shadows. Robin senses something more is going on with H.I.V.E. and discovers Deathstroke has been manipulating them to a sinister end. The Teen Titans need to battle their enemies and their own doubts to unite and overcome the evil forces around them.