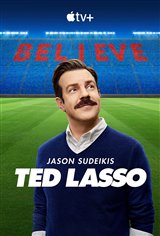 College-level American football coach Ted Lasso (Jason Sudeikis) is hired to coach AFC Richmond, a professional soccer team in England, despite having any knowledge of the game.

His boss, Rebecca Welton (Hannah Waddingham), is the new owner of AFC Richmond following her divorce. The extremly affable Lasso doesn't realize she hired him because she wants to see the team tank, in order to get back at her ex-husband, who cheated on her with a younger woman. Helping her in this task is Director of Football Operations Leslie Higgins (Jeremy Swift).

However, with his longtime assistant, Coach Beard (Brendan Hunt), Lasso begins to make headway with the team.