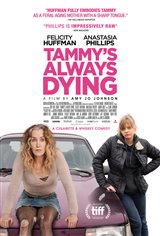 Every month, when the welfare money runs out, Hamilton resident Tammy (Felicity Huffman) drunkenly makes another suicide attempt on the same bridge. Each time, she's talked down by her only child, Cathy (Anastasia Phillips), 35, who's frankly embarrassed by this woman who has always been more of a burden rather than a parent.

When she's not bailing out her mother, Cathy works as a bartender and enjoys weekend getaways to Toronto with her gay friend Dougie (Clark Johnson). However, after learning that her chain-smoking mother has stage 4 cancer, Cathy reluctantly moves back to her mother's dilapidated home to take care of her, but feels guilty about still wanting to leave the small town, where she feels trapped.