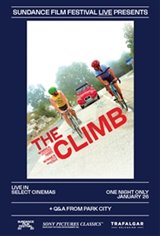 Direct from the Sundance Film Festival: on Sunday, January 26, 2020, the Sundance premiere of The Climb will be broadcast live to select theaters around the U.S.-complete with the filmmakers' intro, the film screening, and the Q&A with cast and crew.

The Climb, an official 2020 Sundance Film Festival selection, also won the Coup de Coeur prize at the 2019 Cannes Film Festival. Kyle and Mike are best friends who share a close bond-until Mike sleeps with Kyle's fiancée. The Climb is about a tumultuous but enduring relationship between two men across many years of laughter, heartbreak, and rage.