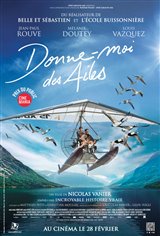 Thomas, 14, is forced to spend his summer vacation in the Camargue with his father Christian, a researcher at the Museum of Natural History. The idea of ​​being stuck in a small house without Wi-Fi doesn’t impress the teenager, who is indifferent to his father’s somewhat crazy project. Because against the advice of the director of the museum, his father has decided to save the dwarf geese of Lapland from extinction by teaching them a longer, but safer migratory route. To achieve this, Christian undertakes the breeding of 20 birds who will serve as guinea pigs during the first perilous journey. As the days pass, Thomas begins to accept the birds, who soon follow him. When the time comes, father and son set off for northern Europe to release the geese. But when they arrive in Norway, the health authorities threaten to destroy the whole project.