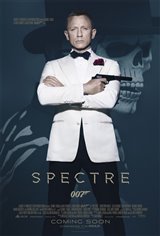 When M leaves behind a cryptic message for Bond (Daniel Craig) that's found only after her death, his loyalty to her is tested as he sets out on a rogue mission through Mexico, Italy, Morocco, and Austria, where he uncovers a secret organization, not only responsible for her death, but threatening much more.

From gaining access to a secret meeting, to watching MI6 and the fate of the agents licensed to kill possibly ceasing to exist, Bond begins to peel away the layers of deceit and betrayal to uncover much more than he bargained for.