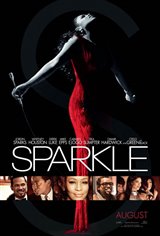 The year is 1968. Motown is sweeping the nation and girl groups are taking the music industry by storm. Sparkle (Jordin Sparks), a young musical prodigy from an affluent Detroit neighborhood, is determined to be part of the craze. Going against her single mother's (Whitney Houston) wishes, Sparkle teams up with her two sisters, Delores (Tika Sumpter) and Sister (Carmen Ejogo), to form a musical group with the potential to make it big.

As she comes face to face with her dream, Sparkle quickly realizes that it's not all about the fame and glory. She struggles to balance family life, her career and a new romance with her manager Stix (Derek Luke), not to mention her personal and professional relationship with her sisters—the music business can be a cruel and unforgiving place, just like her mother had warned. With all of the unexpected challenges of her new life, does Sparkle really have what it takes to go all the way?

Sparkle is a remake of the 1976 film of the same name, which was inspired by The Supremes, a girl group formed by three sisters from Harlem in the late 1950s.