Sorry for Your Loss 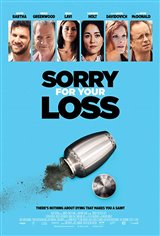 Ken (Justin Bartha) has just become a new dad, but is tasked with the sorrowful job of going home to bury his own estranged father. He is guilted into fulfilling his father’s dying wish – to have his ashes scattered on the playing field of the local pro football team.

It’s a task that proves tougher and funnier than it should be but with the help of his lonely, hippy mother (Lolita Davidovich) and his father’s old golf buddy (Bruce Greenwood), Ken learns a little about himself, his marriage, and most importantly, that dying doesn't automatically make you a saint.