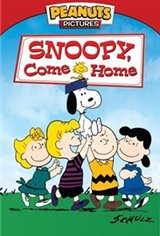 The Snoopy/Charlie Brown newspaper cartoon series burgeoned into a considerable empire for Charles M. Schulz, as it became an American phenomenon which spoke for an entire generation. In this feature-length animation, Lila, Snoopy's previous owner, writes him from the hospital and invites him to visit. Aided by his loyal bird companion Woodstock, he does.

When she asks him to come back to live at her house, he agrees and goes back to tell Charlie Brown goodbye.