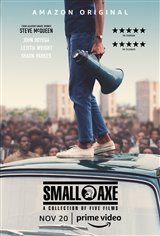 This series of five films from filmmaker Steve McQueen is based on real-life experiences of London's West Indian community between 1969 and 1982.

Mangrove - When Frank Crichlow's (Shaun Parkes) Notting Hill restaurant, The Mangrove, is constantly raided by racist policemen who are determined to put a stop to a Black-owned business, the Black community decides to make a statement. They hold a peaceful protest, which turns violent when the police advance on them, leading to the arrest of nine of the protestors, including Frank and Black Panther Altheia Jones-Lecointe (Letitia Wright).

Lovers Rock - A young woman (Amarah-Jae St. Aubyn) from a religious family sneaks out to a house party.

Alex Wheatle - Alex Wheatle (Sheyi Cole), having spent his childhood in a mostly white institutional care home with no love or family, finally finds not only a sense of community for the first time in Brixton, but his identity and ability to grow his passion for music and DJing. When he is thrown in prison during the Brixton Uprising of 1981, he confronts his past and sees a path to healing.

Education - Kingsley (Kenyah Sandy), 12, is fascinated by astronauts and rockets. When he's sent to the headmaster's office for being disruptive in class, he's told he's being sent to a school for those with "special needs." His parents are unaware of the unofficial segregation policy at play, preventing many Black children from receiving the education they deserve, until a group of West Indian women take matters into their own hands.

Red, White and Blue - Despite having a very good job as a research scientist, Leroy Logan (John Boyega), whose father was brutally assaulted by two policemen, decides to join the Metropolitan Police in an effort to change the racism within the force, but he soon realizes that doing so is much more complicated and difficult than he could have imagined.