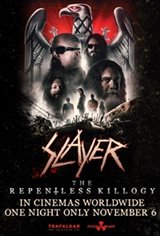 For nearly four decades, Slayer's onslaught has proven them to be the supreme thrash-metal band on the planet - the band that other heavy acts are measured against and aspire to. With their place in music history secure, Slayer - Tom Araya, Kerry King, Gary Holt and Paul Bostaph - in conjunction with Trafalgar Releasing, Nuclear Blast Records and Prime Zero Productions, will unleash the Slaytanic offensive on the big screen when "Slayer: The Repentless Killogy" debuts in movie theatres around the world on November 6, 2019. Uncompromising and unmissable, this one-night-only event will feature the short film paired with Slayer's entire performance filmed at its August 5, 2017 concert at the Los Angeles Forum as well as a cinema-exclusive welcome from the band captured from the South American leg of their Final World Tour.