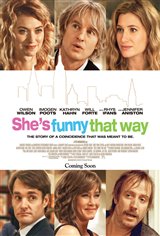 A married Broadway director (Owen Wilson) solicits a young prostitute (Imogen Poots), who dreams of becoming an actress. After he pays her off to keep his secret from his wife (Kathryn Hahn), she lands a part in his latest play the very next day.

The playwright (Will Forte) quickly falls in love with her, even though he's actually dating her therapist (Jennifer Aniston). As the film unfolds, all of their lives begin to overlap in a series of awkward and hilarious events.