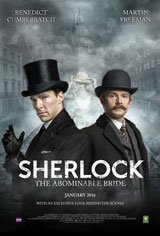 This special Sherlock Holmes episode finds Sherlock (Benedict Cumberbatch) and Dr. Watson (Martin Freeman) living in Victorian England. A bride commits suicide on the streets of London, then when it seems she has come back from the dead to get revenge, the two get involved in the case.

When Dr. Hooper confirms that the bride is in fact dead, Sherlock loses interest, and when other men are killed, purportedly by the dead bride, he shrugs them off as copycat killings. That is, until a friend of his brother's is threatened by the same ghostly apparition.