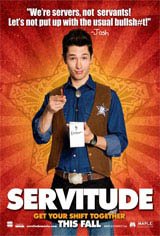 Rather than pursue his childhood dream of becoming a writer, Josh Stein (Joe Dinicol) decides to go along a more practical path—law school. But as the deadline for enrolment quickly approaches, he's reluctant to walk away from his job waiting tables at Ranch Steakhouse.

This decision makes his girlfriend furious. She gives him an ultimatum—he has to quit his job right away or their relationship is over.

But when Josh goes in to quit, he finds that a platter of tainted chicken wings has left the restaurant short-staffed. To make matters worse, the company's new super-strict owners have sent over a tough guy from head office to audit operations.

Josh decides to work one last shift—and it turns out to be eventful when he uncovers a secret memo from the new owners.