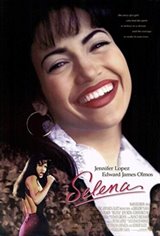 Selena Quintanilla was a major figure in Tejano music, a Grammy-winning recording artist, a beloved star in the American Southwest and Mexico, and seemed poised to cross over into mainstream popularity on the U.S. pop charts when she was murdered on March 31, 1995 by the president of her fan club.

Written and directed by Gregory Nava, this biopic concentrates on Selena's relationship with her family and her rise to fame, dealing only briefly with her tragic death. Abraham Quintanilla (Edward James Olmos) is a veteran musician who leads a family-based singing group, The Dinos.

At a young age, he notices that his daughter Selena (played as a child by Becky Lee Meza) has a strong singing voice, and he works her into the act (her big number is a version of Over the Rainbow).

However, as she grows older, Selena (played as an adult by Jennifer Lopez) wants to establish her own musical identity; while her heritage is Mexican-American, her primary language is English, and her favorite artists are American pop acts like Donna Summer.

While Selena and Abraham sometimes argue about the musical direction of the group, he always respects and supports her talent, and her blend of Tejano roots music and danceable pop rhythms soon sparks a revolution in Latin music.

Selena later earns the wrath of her father when she becomes romantically involved with Chris Perez (Jon Seda), a rebellious and long-haired guitarist hired to play with the group, but when they elope and Selena convinces Abraham that their love is sincere, Chris is welcomed into the family.

After a long string of successes on the Latin charts and playing to a sellout crowd at the Houston Astrodome and a crowd of 100,000 at a stadium in Monterey, Mexico, Selena begins recording her first album in English, which is expected to make her a mainstream star on the level of Whitney Houston or Gloria Estefan.

However, the fates decreed it was an album she would never complete. Selena was produced with the participation of the Quintanilla Family (Abraham was executive producer), and Selena's own recordings were used on the soundtrack.