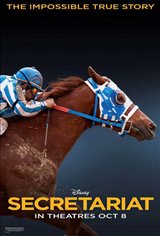 Born January 27, 1922, Penny Chenery was the youngest of three children. Her family owned Meadow Farm, a thoroughbred racing operation and horse breeding business in Virginia. Having earned a Bachelor of Arts from Smith College, Penny studied at Columbia Business School, where she meet John Tweedy, whom she would go on to marry in 1949.

She was a Denver housewife and the mother of four children when her father fell ill in 1968 and was admitted to hospital. Despite her lack of horse-racing experience, Chenery was prepared to take over the 2798-acre Meadow Farm thanks to her father, who had encouraged her to continue her education—and not just for learning's sake.

"I had been brought up as part of a family that was meant to take over Dad's business, and I was equipped to do it," says Chenery. "After college, I wasn't married and wasn't working in the horse business and my father said, 'Well, you need to go to school and learn something that will help you get a job.' I went to the Graduate School of Business Administration at Columbia. You really have to have a product you believe in and the resolve that you can do it. I worked very hard and was very determined—and I didn't really look at what the men thought of it."

Before he fell ill, her father had struck a deal with Ogden Phipps, a wealthy horse owner and breeder. A coin toss would determine who'd get first pick of two foals produced by Phipps' stallion Bold Ruler and Chenery's mares Hasty Matilda and Somethingroyal. By the time of the all-important toss, Penny Chenery was in charge. Phipps won the toss, making what most deemed the obvious choice, leaving Chenery with the yet-unborn horse who would become Secretariat. She'd had her eye on that foal all along, and time would prove her right.

Against all odds, with the help of veteran trainer Lucien Laurin, she managed to navigate the male-dominated business, fostering 1973 Triple Crown winner Secretariat—one of the greatest racehorses of all time.

"It didn't occur to me that I was a woman in a man's field. I just thought I had the best horse," she says. When a movie about Secretariat was made for release in 2010, she said: "What was so brilliant [about the movie] was the portrayal of the real people, the hope and humor we had on this adventure with this amazing horse. I feel like everyone involved told our story with warmth and intelligence."