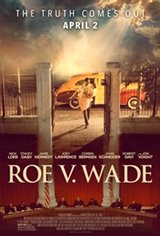 The film begins with Margaret Sanger, the founder of Planned Parenthood, who launched an initiative called "The Negro Project." She gives a speech at a KKK rally, describing her intentions to reduce the growth of the African American population by legalizing abortions.

Quickly, Dr. Bernard Nathanson, the most outspoken doctor performing abortions during this time, joins her cause, followed by outspoken feminist Betty Friedan. A team of activists begin to search the country, looking for a pregnant girl they can use to sue the government for her right to have an abortion.

They find the perfect pawn: a young woman with a 10th grade education, struggling with poverty and other issues, named Norma McCorvey, now famously known as "Jane Roe We watch as Norma and her legal team sue Henry Wade, the district attorney of Dallas County.