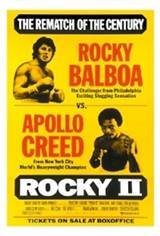 Meanwhile, Creed is brooding over his near loss to a fighter he considers an amateur far beneath him and decides to goad a reluctant Rocky into a high-profile rematch. With the family resources dwindling and his pride wounded, Rocky decides that fighting is all he knows and makes the fateful decision to climb back into the ring once more with Creed to vie for the championship belt, despite assurances from all concerned that he will blind himself irreparably.