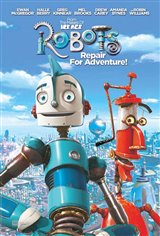 Rodney Copperbottom (Ewan McGregor) is a small town robot who has a gift for inventing things and a hope of moving beyond his quaint surroundings. He works side by side in a restaurant with his dad who is a dishwasher - literally a dishwasher. You open his chest and load in the dishes. Rodney has dreams of something greater. Armed with his unique talent for inventing, Rodney embarks on a journey to Robot City to meet his idol, the majestic inventor Bigweld (Mel Brooks). An iconic figure in all of Robot City, Bigweld has spent a lifetime creating things to make the lives of robots better.

Once in Robot City, Rodney finds that things are not quite as he expected, and his quest may be a lot harder than he imagined. As he tries to navigate his way around this new city, Rodney befriends the Rusties, a ragtag group of street-smart bots who know the ropes. One of the Rusties, Fender (Robin Williams) immediately becomes Rodney's best friend and even lets his spunky kid sister Piper Pinwheeler (Amanda Bynes) tag along. They take him in, and for now, at least, Rodney has a home in Robot City.

Rodey also meets Cappy (Halle Berry), an executive at Bigweld Industries who takes an instant liking to Rodney and sees a lot of herself in him. Along their adventures, Rodney and his new friends encounter unsavory characters who try to derail Rodney's plans to find Bigweld and save Robot City. The result is a timeless, comedic tale that pushes the boundaries of animation while introducing characters rich with humor and soul, and a heart-warming story proves that a robot can shine no matter what he is made of.