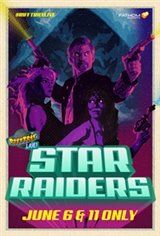 To celebrate the 10th anniversary of RiffTrax Live, Fathom Events and Rifftrax have joined forces to bring you Star Raiders! It's the year 2762. The galaxy is plagued with warring factions using hokey special effects to destroy each other.